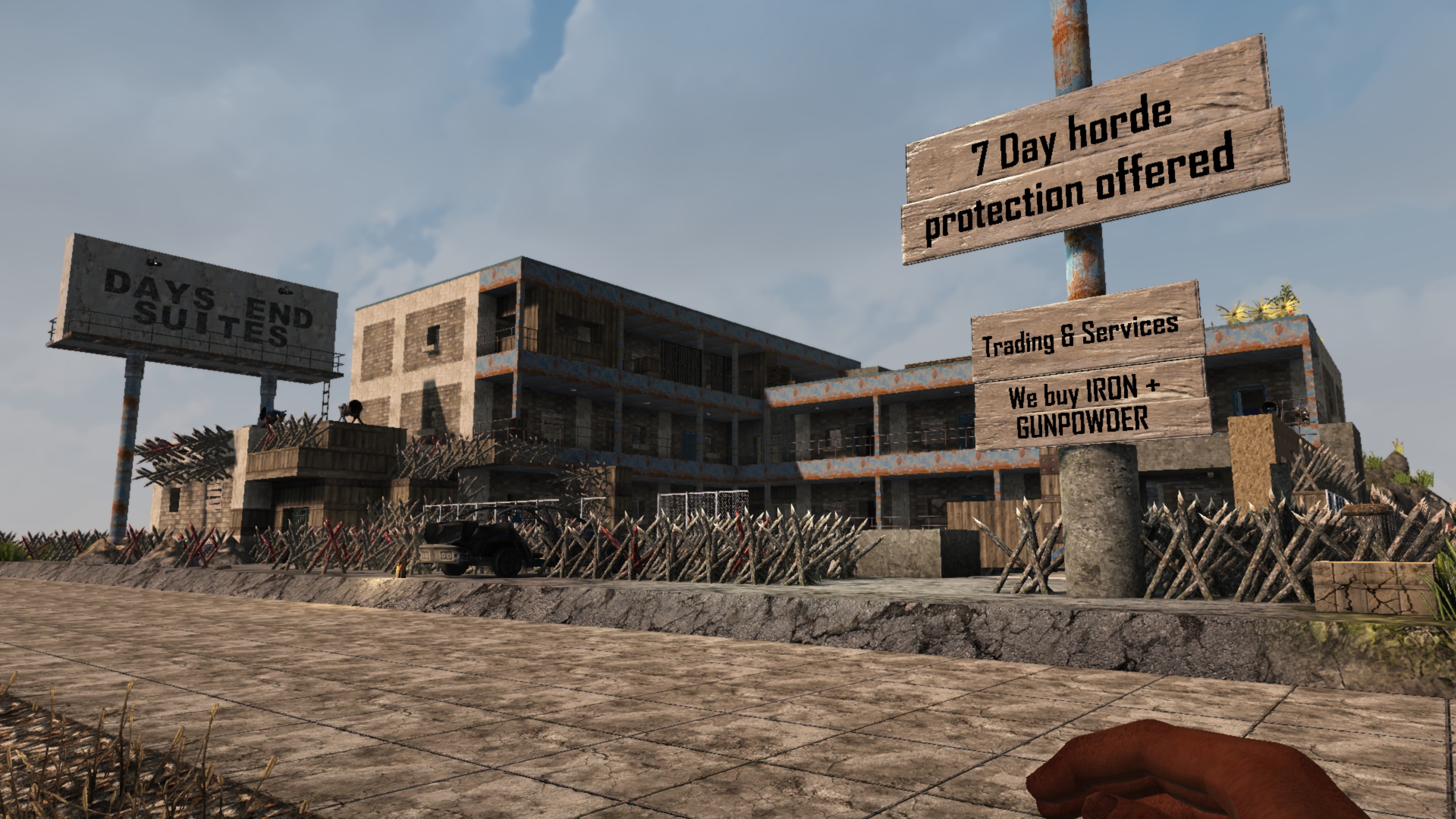 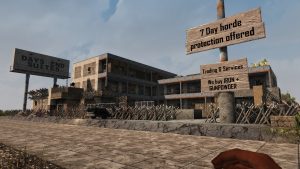 It started with good intent...

Our most recent survival play through has without a doubt been one of the most interesting yet and it's not too late to join in the shenanigans,  make some friends.... make some enemies or give Valmod overhaul a try on our custom compo pack/Slaanhatten map.  It's the second time we've tried the full overhaul version of Valmars masterpiece, hidden doors, custom UMA zombies, silenced weapons and custom ammunition all feature prominently but it's perhaps the forced progression that is the big difficulty changer for many who are used to the 'easy mode' vanilla experience.  On top of the many custom additions, Alpha 15 brought some interesting changes of it's own.  We finally have NPC traders, vending machines, 7 day hordes for everyone and after the 15.1 patch 'safer' player spawns. 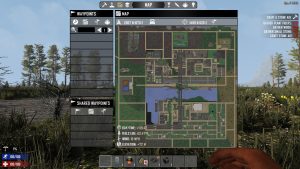 The large custom prefabs visible on the outskirts of the city.

Our map this time made even more of an effort to deliver our dream of a more 'urban style survival',  limiting the amount of prefabs not just in the wilderness but also in the main cell hubs too.  The expanded cell size required to decently spawn in Slaanhatten already helped to thin out the amount of hubs our playable area contained and rather than repeat what we've done in the past with the custom cells containing the larger community built prefabs we decided to sex up the central area even more and drop a nice selection of them around the edges of the giant city filling in some of the empty areas.  We increased the length of our game days to 90 mins giving people extra travelling/scavenge time and punishing them with a nighttime that lasts 30 mins instead of the default which clocks in around 20-22 mins.  It does not seem like much,  but when the blood moon shines those extra 8 minutes of horde time can be the difference between just scraping through the night and a total devastation death fest.

The last area worth mentioning is our claim block adjustments.  For those new to multiplayer or 7D2D in general, the claim blocks are an item which when placed in the world offer massively increased protection from player damage, almost full damage protection against explosives and ring a very loud alarm style bell whenever another player hits a block within their protective radius.  We've always made PvP available, much to the dismay of many who come along thinking they are gonna get the ultimate zombie survival experience only to find it's an unforgiving brutal game of hide and seek  where the active and stronger players prey on the weak, living off them like cattle in a field.  Now with the PvP rule set and our hallmark 'anything goes' attitude we decided to ramp up claim protection to give the not so active/casual players a chance at not having to log into an empty base and hopefully reduce the amount of people who finally crumble and leave when they can't be arsed to 'start' again.

In the previous version of Valmod, he rather cleverly included a custom workstation that would act as a merchant delivery box where players could spend some dukes (in-game currency found infrequently) to 'mail-order' items ranging from food and drinks all the way to the almighty sniper rifle and other various weapons.  The catch?,  besides from a rather large delivery (crafting) time and the rarity of the currency needed,  the items purchased were a uniform 300 quality, which in the early game could be quite a powerful investment if you were lucky to collect enough coins and towards the endgame became a bit more like a convenient way to keep yourself fed and watered.  There was a good balance to the items made available, the quality they were delivered at and the rarity of the coins used to purchase them.

The introduction of the NPC traders meant players could sell virtually all of their excess loot for coins and although they would only accept a certain amount of each item until their loot timer refreshed we felt the competition on a busy server to be the one who could make the trade and perhaps buy the few decent items available was a reasonable thing to allow unchecked for the most part.  What we didn't realise when we launched the server was Valmar had also adjusted his own version of the vendors and while I did build one quite early on I was too naive in their function as a gateway to bypass the hard earned progression we are usually forced into when playing the overhaul version of his mod.  Now there are many factors to consider when deciding if something like this is broken,  our loot refreshes every 7 game days (10.5 hours of real server uptime) and although it was notched down to 75% the sheer amount of containers within Slaanhatten combined with the easy access to the hub meant people were stocking up on an alarmingly high number of coins in a short period of time.  The other thing I foolishly did not realise was every separate 'Valmod vendor' had it's own mini loot table which would refresh every 1-2hours.  Soon,  the typical base would contain no less than 20+ of these vendors and it was not just food, ammo and the odd bit of decent gear that really started to mess with progression but the things like rebar frames, forged iron/steel and even steel polish which was meant to be the ultimate end game upgrade for your bases steel walls. 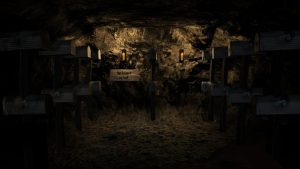 All of a sudden some people who were 10-15 hours (or less!) into their game were sitting on boxes of coins and simply purchasing the required items they wanted and building more vendors/refreshing them until they had stacks of items that just would not normally be available at such an early stage.  Naturally not everyone abused this system to the max (or so they claim) but the fact that such a system exits at all suddenly puts people who want to enjoy a decent hard play through at a serious disadvantage.  PvP is the ultimate nature of our game but we want to hold true to the PvE and survival aspects which should not be so easily cast aside.  When coupled with the ability to farm survivor notes (a custom item that rewards a perk point when read), all of a sudden our 'super hard' survival game was conquered by some in a matter of a couple weeks,  then boredom kicks in and the poor people who did not jump onto this exploitative bandwagon or the freshmen, find themselves falling victim, not to PvP for the need to steal someones gear to survive, but simply for the 'lols', 'nothing else to do'  or 'because I can'.

Adjusting the scales of balance

I've been asked several times why we still have not changed anything about this on the live server and the truth of the matter is my personal opinion does not mean I'm right.  We are always open to the idea that people may prefer this style of game-play and perhaps when made aware of the shortcuts the server could still be 'fair' for all.  As mentioned earlier there's typically a mad dash to be the one to nab all the coins from an NPC trader when he's open for loot and we've had some real hot spots of death and robbery in and around the trader PoI's which is the type of thing we'd like to encourage, it keeps people looking over their shoulder and I personally find it a bit of a thrill when there's a bunch of people online and you need to make some space in your chest room and are toying with the idea of "is it safe to do so?".

People are also starting to realise what the claim adjustments meant when it came to base raiding,  almost reducing the damage taken from any tool/weapon to 1.  Yes that's right,  ONE damage per swing, shot, punch, rocket.  Naturally players wanting to do it the best way found that using one of valmods custom tools, the weed wacker, was the fastest way to apply damage to a claim protected block.  Besieging a steel or reinforced concrete castle with a knife...  I personally had to give this ago as I'd never really tried to raid someone this play through and had some good excuses for revenge so I packed my bags with maybe a dozen of them, a stack of whetstones (these repair them) and dug my way to an underground section of wall at one of our players claimed bases.  Nearly 3 hours later I'd broken two reinforced concrete blocks ( 6000hp + 3000hp per block) and a claim block (8000hp),  it was taking so long I just tacked my mouse button down and left my character pointing at the block I was hitting.  Now we all hate logging in after a nights sleep to find we've been cleaned out, it's not real PvP, it's a bastards trick and we all do it...  but this was the sheer opposite end of the scale,  raiding was so boring and taking so long it was not really feasible anymore.   I know some people may think this is a better system,  I personally hate offline raiders and it forces the PvP out in the open or even better, in the city! but allowing people to just slowly expand an untouchable area and amass unassailable assets in huge quantities is definitely not good for the health of the game in the long term, people become complacent, care less for the losses outside and eventually die of boredom.

While beautiful in function,  after careful thought and deliberation it's been decided that this stuff just needs removed.  On paper, a single tnt charge will strip a single layer, roughly 10 x 10 in size to the floor and allow you to pickup the materials.  Excellent if used as the names suggests to mine,  it requires a reasonable amount of gunpowder that can be easily spared in the later game but is quite affordable at the beginning once you've unlocked the recipe via perks.  It's a big chunk of grinding the normal way but once again survivor notes make the acquisition of the recipe a simple affair and the main problems stem from the results of detonating more than a single charge at once.  I don't claim to fully understand how or why,  but the results of a handful of these going off at once are DEVASTATING,  our map shows a huge amount of destruction caused through large amounts of tnt being used for everything except mining.  For the sake of our city, our sanity and our player base, we will not be including this item in any future play through,  it's there to be sampled atm if you want to check it out. 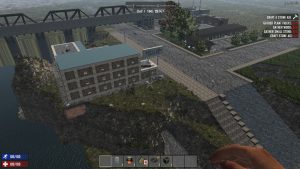 Before the TnT grudges began... 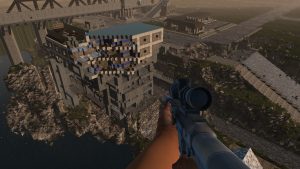 Where the fuck did that hill go....

We are currently reviewing what our anything goes policy will cover, it's a very non-specific rule to have and often leads to people assuming even the most dickish behaviour is cool even though we've always explicitly stated alongside, ask an admin if unsure.  My personal motto sings to the tune of "If there's nothing for you to gain.... then there's probably something for the server to loose".  Rob, plunder and pillage by all means, but always think of the poor souls your screwing.  Throwing someone a bone after cleaning them out could in some cases make the difference between a quitter and someone who may just hang around to shoot you back, so first and foremost, think about your actions and dis/respect each other always.

One comment on “7 Days to Die: Alpha 15.1 Server Balance Issues and Recap”